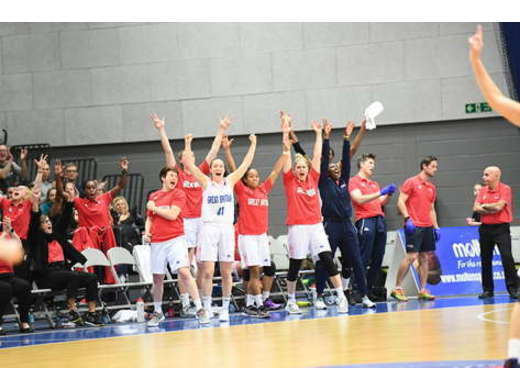 Congratulations Stef and the rest of the team

With second placed Greece beating Israel earlier in the day in the other qualifying game in GB's group, the pressure was on for coach Chema Buceta and his side to deliver the goods in front of a passionate home crowd.
And Great Britain did just that - leading from start to finish, shooting an efficient 49 percent on the night, holding Portugal to just 25 percent from the field, overall. And as a result of this win, Great Britain top their EuroBasket Women qualifying campaign with a 5-1 record in Group D.

Rachael Vanderwal led all scorers for Great Britain with 21 points, which included a perfect 5/5 from three-point land. Johannah Leedham flirted with a triple-double, but settled for an impressive statline of 18 points, 12 rebounds and seven assists. Temi Fagbenle added 17 points.

On her 101st and final cap, Azania Stewart had 10 points, eight rebounds and two blocks before coming off for the last time in a GB uniform with 1:21 remaining to a standing ovation from the crowd in Manchester.
After a scrappy beginning, where both teams struggled to find their rhythm, offensively in the first three minutes, a three-pointer from Vanderwal triggered a 10-0 run late on in the first quarter as the hosts took Portugal out of their comfort zone, offensively, forcing them to play away from the three-point line, and due to their weakness inside, Great Britain took advantage.

Vanderwal would strike again with two seconds left, as GB limited Portugal to just four field goals, and as a result, the hosts breezed into a 20-9 lead after the first.

The onslaught would continue as baskets from Fagbenle and Leedham to start the second quarter, followed by sublime ball movement, culminating in a three-pointer from Chantelle Handy off the feed from Karlie Samuelson, gave Great Britain a 27-11 lead.

Everything seemed to be going GB's way as they were able to easily take advantage of poor shooting from the Portuguese, and following a steal and resulting lay-up from Leedham with 3:12 left in the second to give Great Britain a 31-12 cushion, Portugal coach Ricardo Vasconcelos called a timeout.

The break in play turned out to be one of the few bright spells for the visitors, who were able to end the second on a 7-0 run but GB still led comfortably 33-19 at the half.

Great Britain raced out of the blocks in the third, as Fagbenle led a 9-2 start to the quarter and despite the best efforts of Sofia Silva, who battled inside all-night, Portugal were unable to make the most of their open looks, both inside and out.

Before bidding the basketball world farewell, Stewart would hit six straight points in a quick-fire 11-2 run for the hosts who had a commanding 53-27 lead, heading into the fourth.

And with Portugal dropping in energy, Great Britain would continue to pull away in the fourth quarter. A 12-0 run would extend the lead to 67-30 as all 12 players saw decent court time and when the final buzzer sounded, they all ran on to the court, in celebration, as they confirmed their place at EuroBasket Women, next year for the fourth time in its history.

Portugal #8 Ines Viana "It was a bad day, we can say it like that. They were better than us, so I don't have a lot to say. We tried, but it wasn't our day.

"We need to score more. We lost a lot, we missed a lot, and I think after that, after we started missing, our head is different. They start scoring, and we are trying to go with the game and we couldn't. But, if we score more maybe the game would be different."

Coach Jose Maria Buceta "I think this is a very happy day, because we reach our goal, but in a way sad, because this is Azania's last game. It's great to get a win and now we look forward to EuroBasket in 2019."

Azania Stewart (on retirement) "I'm really happy, it's hard work that we've put in over the last year and step-by-step. Coach has told me 5-1, that's great for us moving forward into EuroBasket, but personally I'm just so happy to be home and all my family and friends can come and support me and the team. I just got put in great positions to succeed tonight, and I'm happy with the result.

We made sure that we came out with good energy and played our style, but at the same time respect them. We knew they were an aggressive team, and we had watched them on film, so obviously they were scrappy and a really hard team."

Back in the Sports Hall this Saturday for a triple header of @NBLengland action... 11:30am - U16 Boys vs Huish Tau… https://t.co/yxJXeEIZ2u

RT @cardiffmet: And the winner is... US! We did it, we are @TimesHigherEd #THEAwards UK University of the Year 2021! 👏 This award is for e…

Amazing news that @cardiffmet is the University of the Year for 2021! *Literally* no better place to study, learn,… https://t.co/ZJeg5d0VKR